We’re definitely playing catch-up today here at the Fake Meat & True Love house after a week of party planning, holding said party, and binge-watching the new season of Stranger Things. Thursday’s prompt was “Meals for the young (at heart)”. We wanted to pick something that we loved when we were young, but make it a bit more “grown up” and fancy.

For both Sarra and I, many a childhood meal consisted of fish sticks and macaroni and cheese. We both liked our fish sticks with ketchup, but Sarra usually skipped the ketchup if there was macaroni and cheese available, since she could dip the fish sticks right in the excess cheese sauce from the macaroni. We both loved it, and since it’s a classic slice of Americana on a plate, it’s still right up our alley. So then, how can we make it better? Well, read on to find out!

The fish sticks were relatively straightforward. We have never cooked with the seaweed soy fish that they sell at Vegan Haven; however, we’ve had it at restaurants, so we knew we liked the flavor and texture, we just had to figure out the best way to cook it. Since we were going for fish sticks, I needed to figure out a breading. To boost the health value of the fish, I used almond meal as the coating, with a little almond milk to help stick it to the fish sticks. From there, I popped them into a 400 degree over for about half an hour until they were nice and crispy. One trick I had up my sleeve: I put a baking sheet in the oven while it preheated. Then, I put the fish sticks on the hot baking sheet just before putting them in – the hot baking sheet seared the bottoms of the fish sticks. This helps in getting them super crispy on the bottom. 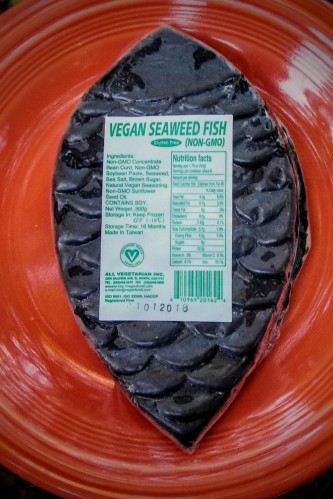 Moving on to the macaroni and cheese, we wanted to really take it to another level. We are in the thick of Brussels sprouts season here in the Pacific Northwest, so we’re trying to eat them as much as possible, so we decided to go with a five cheese Brussels sprouts macaroni. I started by quartering and roasting the Brussels sprouts. In order to really maximize the flavor, I sprinkled some Armadillo Rub on it, a wonderful, fiery spice blend made by the good folks at Tears of Joy in Austin, Texas. We love Austin, and we never fail to stop by Tears of Joy when we are there. It is a wonderland of heat – including their own in-house made spice blends and hot sauces. It’s so worth the stop next time you’re in Austin. 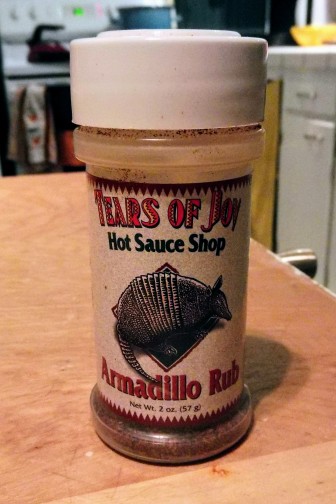 Go pay them a visit!

While the Brussels sprouts were roasting, I cooked up some whole wheat penne pasta and made the cheese sauce. The sauce started out as a roux, to which I added some almond milk to make a rich, thick, creamy base to start from. Then, I whisked in the five cheeses: Violife Mature Cheddar, Nu Culture Bacony Chipotle Spread, Violife Parmesan, Parmela Cheddar, and Miyoko’s Kitchen Smoked Farmhouse. That cheese sauce went all over the pasta, and then I mixed the roasted sprouts into the whole mess. It was glorious! The sauce had a rich, cheesy flavor that perfectly matched the spicy roasted Brussels sprouts. So much goodness! 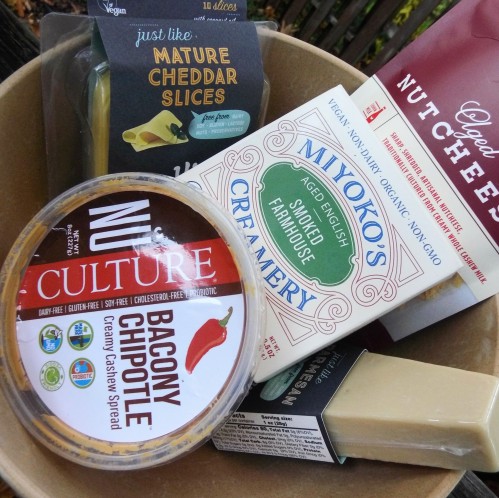 Look at all this cheese! 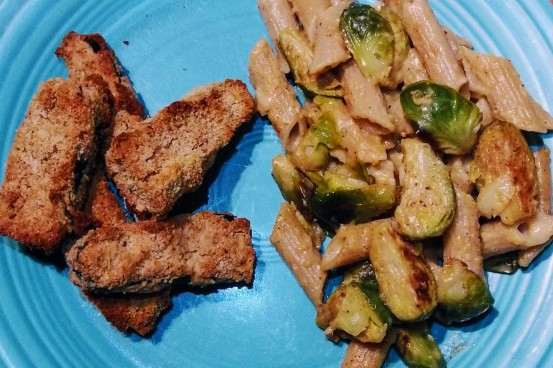