Making the humble potato the star of the show.

Yeah, this post was due 8 days ago. I know! But 8 days ago was Mike’s birthday. and even though I made this dish earlier that week, we were just too busy on the 21st for me to get it posted. In fact, we’ve been busy every day until today.

And this will be a fairly short one. Because I’d intended to post this on Mike’s birthday, I hadn’t planned to write much at all. But I did cook, and I did take photos – albeit poorly-lit ones!

This prompt was originally during Cast Iron Week. When I was reading the prompts for what we’d deemed Cast Iron Week, I knew pretty early on which dish I wanted to make for this potato prompt.

We don’t usually buy those cookbook-priced “special issue” themed magazines, because
1) they’re full of murdered animals, and 2) they’re ridiculously priced. But we did find one we couldn’t easily resist a couple of months ago. 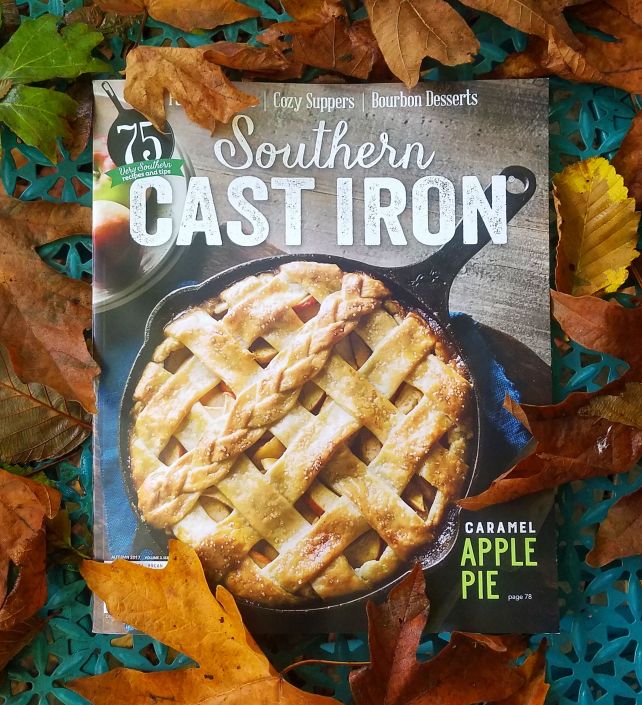 They had us at “Bourbon Desserts”.

No, I didn’t make a bourbon dessert for this prompt – more’s the pity. But there is a recipe in this magazine for a garlic chicken & potato skillet that I thought would be perfect for Cast Iron Week and Potato Day!

I bet y’all can guess where these came from!

Of course they came from the farmers market! 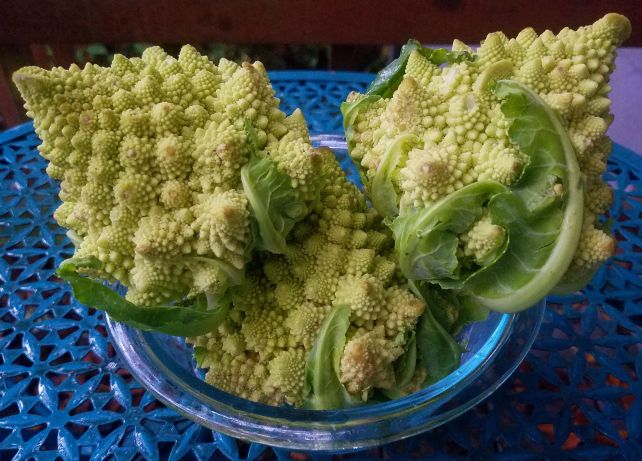 We also picked up some beautiful romanesco at the market that day. The recipe didn’t call for it, but romanesco is so fleeting, so cool, and so tasty that it’s hard to pass up.

The par-boiled potatoes & romanesco, the pan-browned chicken (I used Gardein scallopini cutlets), and an entire head of farmers market garlic were combined in our large cast-iron skillet with Violife parmesan and white wine, mustard, & thyme sauce. It baked up bubbly, hot, and delicious.

Preheat oven to 400°.
Put potatoes and romanesco in a large pot with water to cover and bring to a boil over medium-high heat. Cook until slightly tender, 5 minutes or so, and drain.
In a 12-inch cast iron skillet, heat oil over medium heat. Cook the frozen scallopini cutlets until done through and nicely browned on each side, 5 minutes or so. Remove them from the skillet.
Melt the butter in the skillet and add sliced elephant garlic and halved garlic cloves; sauté until tender and remove from the skillet. Whisk in flour and thyme and cook for one minute, to make a roux. Whisk in the wine, broth, and mustard and cook until slightly thickened, about 5 minutes. Stir in the parmesan until melted. Season with salt and pepper to taste.
Add the scallopini, potatoes & romanesco, and garlics to the skillet. Bake 30-35 minutes; the sauce should be deliciously bubbly. Use good potholders when removing cast iron from the oven, as it gets very hot and takes a long time to cool down. Sprinkle a little parmesan on the top, if you’d like, before serving.
Enjoy! It’s not beautiful but it is very, very tasty and very satisfying!

We had ours with the cheesy beer bread I’d made two days before. Carbier than we’d usually have, but so comforting on a stormy autumn day.

‘Til next time, friends!
❤
Sarra