It’s October, and in the Pacific Northwest, that means two things:

We’re made of pretty hardy stuff in the top left corner of the country, and it’s unlike us to let little things like rain and early sunsets to stop us from enjoying the outdoors. However, the weather forecast for today called for sunny and 71 degrees, so I planned to cook one last grand grilled feast for the season, and just in time, because local Brussels Sprouts are coming into season! I started the journey last night, marinating a few slices of tofu in a broth made of Better Than Broth’s no beef broth, balsamic vinegar, Bragg’s, and some black pepper.

The weather is a difficult thing to predict with any precision under the best of circumstances, and Seattle’s unusual situation makes it even tougher. You see, there are very few monitoring stations out on the Pacific Ocean, making it very difficult to see what’s coming our way. On top of that, any weather systems that do come our way have to work their way over, through, or around the Olympic Mountains, a mass of craggy peaks that tend to randomize the patterns of whatever blows across them. The upshot of that, for today at least, was a day devoid of sun, reaching a measly 65 degrees, with a few spatterings of rain just as I set to lighting the grill. Such is life in our beautiful home, so I continued undaunted.

The Brussels Sprouts were washed and trimmed, and tossed with avocado oil and “Biscayne Citrus Rub” from our friends at World Spice Merchants. I tossed them in a large cast iron skillet, and on the grill they went for about 20 minutes. Then, the tofu came out of the marinade and onto the grill, getting doused liberally in a delicious espresso barbecue sauce from Franklin Barbecue. (We found the sauce while checking out Wheatsville Co-op in Austin – yes, we love food so much that we visited grocery stores on our honeymoon.) To round dinner out, some macaroni and cheese featuring our favorite vegan cheese sauce, Leahey’s! 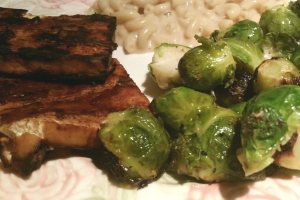 2 thoughts on “A Change of Seasons”