Hello, world! Today, I get to talk to you about my favorite cookbook(s)! You may not understand the scale of this undertaking. We have a lot of cookbooks. A lot. Seriously. There are three shelves on our baker’s rack of cookbooks, and we’ve run out of space and started stacking them in front, too.

It was a difficult choice. This is about 1/3 of one shelf.

For today’s prompt, I narrowed it down to three finalists: the Native Foods Cookbook, pretty much anything by Bryant Terry, or the vintage (1958!) Polish cookbook that I found in Portland last year. Every one of them was a contender for solid reasons. I am an oddity in modern American society – fourth-generation born in the U.S., but I can only claim one national heritage: Polish. Therefore, you can imagine how much fun I’ve been having veganizing recipes from Polish Cookery; I wouldn’t be surprised if my grandmother cooked from that book. On the other hand, Bryant Terry’s recipes are astounding – creative, down home cooking for a modern vegan world. Not at all the heritage I grew up with, but an amazing world of food I’ve come to love as an adult. In the end, I decided to cook from the Native Foods Cookbook, if for no other reason than I’ve been obsessively cooking from this book since we got it a few months ago, and every single meal has been phenomenal.

There are so many fantastic recipes in this book: nacho gazpacho, one of the best taco salads I’ve ever eaten, nuggets, steak, goulash, tacos, and tonight’s feature, the puff pastry pot pie. I’ve always loved pot pies; so delicious, so comforting. Also, I’ve always been a fan of having all of my foods mixed together in one dish…casseroles, hashes, pot pies…I love them all!

Hazel is clearly not amused by the fact that I am using *her* table as a photo studio.

This dinner came together very nicely. First off, let me tell you about our local Mediterranean market. Tucked into the north end of the unfashionable neighborhood of Lake City, which itself is tucked into the north end of Seattle, sits Goodies, one of the many reasons I love to call Lake City my home. We could get lost for hours in Goodies – and there’s only three aisles! Exotic spice blends sit alongside everyday staples like pasta; two full shelves of olive oil selections dwarf the single bottle of canola oil hidden away on the top shelf. But most importantly, there are at least twenty different types of dough designed to wrap your food in. I love wrapping my food in dough, so I’m always in heaven at this store. For the pot pies, I picked up a package of puff pastry dough: 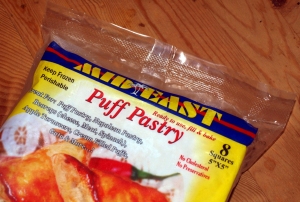 The recipe starts with some lightly boiled vegetables, then you saute some onions (I substituted elephant garlic) and flour, add some milk, and then the vegetables and their cooking water and some seitan (I used Upton’s). Plop that mess into an oven safe dish, cover it with puff pastry, and bake. That’s all there is to it!

We love cute, little food, so I baked these in individual portion sized ramekins. The recipe actually made twice as much filling as I could stuff into the six ramekins we own, so I froze the other half so we could do this again soon! They came out of the oven all golden brown and oozing over the sides. I poked some vent holes in the tops, but apparently it wasn’t quite enough to let all of the pressure escape. I don’t even care, look at how beautiful they are! 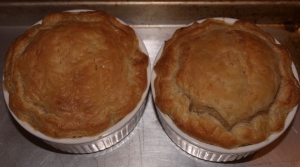 Seriously, look at these things!

Without further ado, here’s the recipe:

The recipe comes with a variation, which is the way I did it: using ovenproof bowls, place the filling into the bowl and top with uncooked puff pastry rounds. Then bake the whole thing together. I also punched some holes in the puff pastry to allow steam to escape, but the photos above prove it wasn’t enough. I also didn’t roll out the dough, since there was plenty to cover all of the bowls without trying to stretch it out. 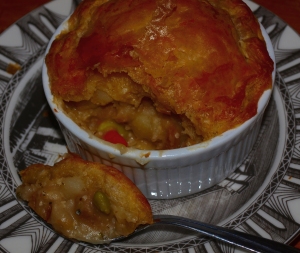 These were so, so good, and not all that difficult to make. That’s why the Native Foods Restaurant Cookbook gets my nod for my favorite cookbook…this week, at least.

9 thoughts on “Vegan MoFo, Day 12 – Tell us about your favourite cookbook!”